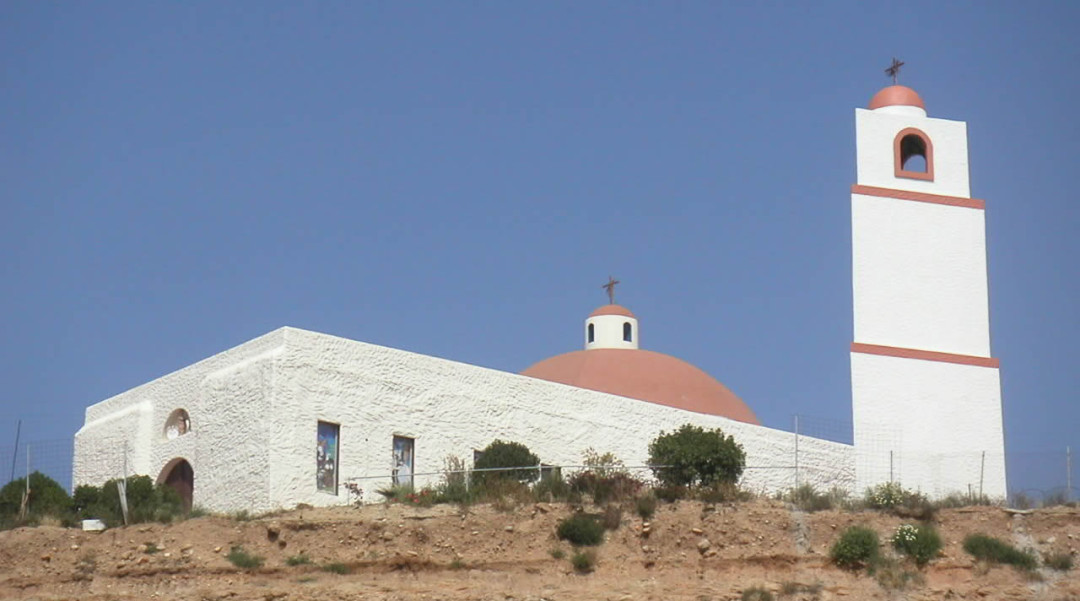 In 1999 the people who live in the neighborhood (Xicotencantl Leyva) behind the Iberoamericana University in Tijuana, asked that we build a chapel so that they could have a place to celebrate Sunday Mass, as well as the other sacraments, as needed.

We decided that 300 years after the arrival of the first Jesuits missionaries to the Baja Peninsula, it would be a great tribute to their efforts if we could build a replica of some of the Mission Churches that these missionaries so ingeniously built back in the 18th Century. We decided to include some of the architectural features of San Ignacio, San Javier and Loreto.

In order to make the walls thicker, after putting up the foundation, we proceeded to use 117 bails of hay for the interior part of the walls, and later covered the hay with wire mesh and cement, in order to give it an adobe effect.

The stain glass windows intend to provide a mini-account of salvation history (from Moses to Jesus Christ), and the interior dome reflects the blue southern California sky, stars and Indian-faced angels, thanks to the artistic talent of Mickey Criado.

The pews were a donation from St. Charles Church in Imperial Beach, California, and many of the ornaments were donated by San Rafael’s parish in Rancho Bernardo.

Our lady Star of the Sea Parish in La Jolla, Good Shepherd parish in Alexandria, Virginia, Holy Trinity Parish in Washington, DC, as well as the generosity of the Rascob Foundation, the Loyola Foundation, the Koch Foundation and the Gavaldon family made it possible for us to complete construction by 2002.